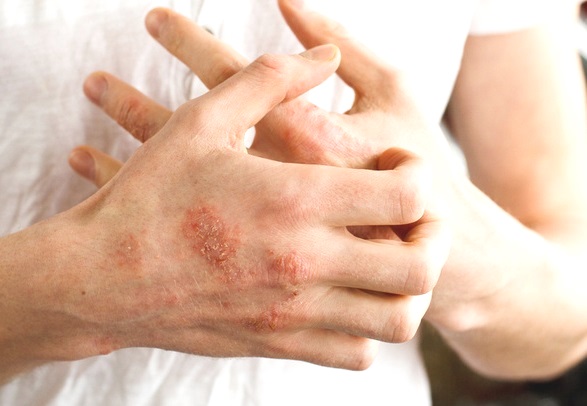 Psoriasis is one of the most common chronic and recurrent skin diseases. There are many different pictures of psoriasis, but the common feature is increased epidermal proliferation (hyperplasia), resulting in exfoliating papular eruptions that resolve without scarring. Psoriasis can affect limited areas of the body, manifesting itself in a few foci. It can be a severe disease that covers the entire skin and joints, leading to disability.

The occurrence of psoriasis

Psoriasis occurs all over the world. However, a higher percentage of the disease occurs in developed countries, which may be related to the influence of lifestyle and food on psoriasis genesis. This was confirmed by the fact that the incidence of psoriasis in Japan increased significantly after World War II and the economic development of this country.

Psoriasis occurs equally often in both sexes; however, the joint variant, described below, more often occurs in women. The disease can manifest itself at any age – from early childhood to old age. The most common diseases are adolescents and the elderly, between 50 and 60 years of age.

The symptoms of psoriasis are red, scaly lumps that have the ability to blend together to form larger lesions called psoriatic plaques, and when they are larger they are called psoriasis plaques. Depending on the prevalence of individual eruptions, we are talking about papular psoriasis (the majority of papules), plaque psoriasis (large confluent psoriasis) or old psoriasis.

In the case of nails, psoriasis most often takes the form of pinpoint indentations (as if they were punctured with a needle), they can also be wrinkled, as well as have changes resembling oil drops under the nail plate – very characteristic of psoriasis. In some people, psoriasis affects the joints – most often the small joints of the fingers, the joints of the spine in the cervical or lumbar spine, and usually asymmetrically large joints, such as the hip, knee, shoulder.

The main symptom of psoriasis is skin eruptions that gradually disappear in the middle to form festoons. Initially, lesions related to psoriasis appear on erect surfaces (extensors of the limbs – elbows, knees, buttocks, sacrum area), later they also appear on the scalp, face, feet, and hands.

The dominant lesion in psoriasis is a red-brown nodule. It is detached from healthy skin and has a peeling surface in the form of silvery scales, scraping of which causes two symptoms:

Early psoriasis lesions appear as small lumps. Sowings of this type occur in large areas of the skin, often after an infection. On the other hand, fully developed lesions are much larger and reach a size of several centimeters, covered with tightly adhering scales. Such a formation is called a psoriatic plaque, which can form “rings” with the disappearance of symptoms in their central part. Additionally, the Koebner symptom of the formation of psoriatic lesions along the epidermis’s scratch line after 6-12 days should be mentioned. It only occurs in the active form of psoriasis.

Psoriasis can also be found around the genitals and anus. Lesions in this region are prone to confluence and exudative symptoms – exudative psoriasis. Skin lesions in psoriasis may be accompanied by lesions located on the nails, i.e., nail psoriasis.

It may also happen that nail psoriasis is the only symptom of psoriasis. Nail psoriasis causes the nails to show thimble indentation and, in the case of placental involvement, the appearance of a yellowish lesion resembling oil drops under the nail plate. Often in the case of nail psoriasis, there is subungual keratosis], thickening, and brittleness of the nails.

Psoriasis can vary in severity – from a few pin-point-sized skin eruptions to severe forms of inflammatory and exudative lesions in a generalized form, referred to as erythrodermic psoriasis. One in five psoriasis patients may develop psoriasis, leading to arthritis.

Causes and Types of psoriasis

Genetic factors are mentioned among psoriasis causes, although the gene that causes it has not yet been discovered. The pathogenesis mechanism primarily involves immunological factors, i.e., malfunctioning of T lymphocytes and cytokines. The causes that initiate the manifestation of skin lesions include:

Severe mental shocks can aggravate psoriasis symptoms, stress, overweight, sleep deficit, smoking, tight clothes made of artificial materials, lack of or excessive hygiene, and the use of inappropriate cosmetics.

The diagnosis of psoriasis is based on the presence of the following points:

The course of psoriasis

A chronic and recurrent course characterizes psoriasis. The asymptomatic periods may last for even years, alternating with periods of exacerbation of the disease and the appearance of skin lesions. They most often appear in spring and autumn, usually under the influence of various stimulants.

The treatment used in psoriasis can be divided into external and internal. The first one is usually sufficient in the normal form. The goal of the external treatment of psoriasis is to exfoliate the scales and then stop the epidermis’ excessive proliferation. The first stage is achieved by using ointments containing salicylic acid in a concentration of 5-10 percent. For the second stage of the external treatment of psoriasis, the following are used: anthralin, corticosteroids (only for small lesions), and vitamin D derivatives.

Relatively new groups of drugs, such as vitamin D3 derivatives and macrolactams, are well tolerated, but have their drawbacks: they are expensive and do not always help. Topical drug should be selected individually. It is very important to lubricate psoriasis lesions, e.g. with cholesterol ointment, drug base or ready-made preparations, available in pharmacies without a prescription. Tar, although they often have an unpleasant odor and permanently stain clothes, work quite well and are relatively cheap, they are very often used in therapeutic shampoos.

In severe cases of psoriasis, corticosteroids in the form of intralesional injections are used in the treatment. The application of preparations with this group of drugs is performed when the changes cover at least 20-30% due to the strong side effects of corticosteroids.

Unconventional methods include cryotherapy (treatment with your urine). Besides, a gluten-free diet, consuming fish oil, avoiding skin injuries, and general hygiene is recommended.

Phototherapy uses the action of UVA (PUVA method) and UVB radiation with a wavelength of 360-365 nm, after the administration of photosensitizing compounds from the psoralen group. Irradiation is carried out about 2-3 times a week. Psoriasis-related changes usually disappear after about 20 treatments. Psoriasis light therapy is used when external treatment alone fails to produce adequate results.

This method consists of irradiating UVA radiation with lamps or in special booths, after prior administration of polar. These compounds are administered 1-2 hours before the start of illumination. Psolarenes are photosensitizing substances, so in this case, they cause an increased effect of light radiation. An extension of the remission period of psoriasis compared to external treatment alone has been noted.

PUVA-bath is a variation of the classic method, differing in that polarises are not administered orally but applied topically by bathing the patient in their solution. In this case, irradiation can be started just 15 minutes after taking a bath.

The use of UVB irradiation in psoriasis treatment is used somewhat less frequently than the PUVA method. The exposure time is longer but has fewer side effects, and as a result of their use, periods of psoriasis remission are longer. These psoriasis treatments are not recommended for people who are sensitive to the sun’s rays, are prone to skin cancer, are pregnant, or suffer from cardiovascular disease.

Herpes Virus – All Important Information About It

Hemorrhoids – All You Need To Know About It